Art is in the blood of man from the beginning stages of civilization. It began as a medium to communicate and preserve the events. It has no language but expressions. Every piece of art in Kerala tells us a story. Vibrant colours and dramatic details bring to life stories you have perhaps heard from your grandma or read in your favourite Amar Chitra Katha series.
Kerala murals are known for their emphasis on beauty, clarity and symmetry.
Accentuating dramatic elaborate costumes and rich ornamentation, these murals are somewhat similar to dance forms like Kathakali.
Murals were used to depict religious and mythological stories, and predominantly in temples.
Artists have to follow strict codes that govern the depiction of figurines and expressions, something that is followed even today.
Lets read some "History"

The history of Murals in Kerala can be traced to the seventh or eighth century AD. Indian Mural in its primitive form was done and can still be seen on the walls of the Ajanta and Ellora caves. They were done by the early Buddhist monks. Later the style of art spread towards the southern part of India especially to Tanjore, and from there to Kerala. One could say that the tradition of painting on walls began in Kerala with the pre-historic rock paintings found in the Anjanad Valley of Idukki district. Archaeologists presume that these paintings belong to different periods from the upper Paleolithic period to the Early historic period.
In Kerala, this form obtained a very distinctive and classical form that is unrivalled and unique compared to any other form of Mural around the world.Though the art form developed as a temple art, it soon spread its wings and became universal. The Murals of Kerala bear the stamp of uniqueness in aesthetic composition and technique. Kerala has the second largest collection of archaeologically important mural sites.


Originally, Kerala murals were a pure form of devotion, eulogizing Hindu gods and events and scenes from their domains. It is noticed that most of them were done in those places in palaces and temples where the common man couldn’t easily see the picture. 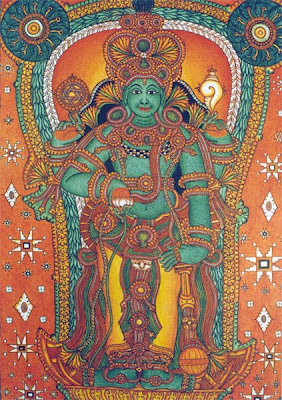 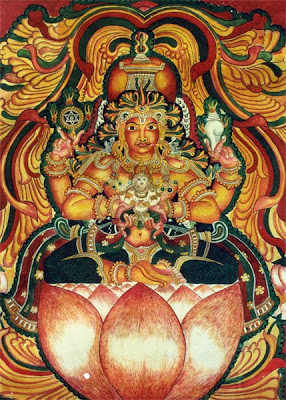 It is perhaps to create a genuflecting atmosphere that temples, palaces and churches in Kerala decorated their walls with intricate chumarchitrangal (murals) that told stories from the Mahabaratha, Ramayana, Puranas and the Bible.
Ancient places like Padmanabhapuram, Krishnapuram and Mattancherry are enriched with murals. One of the most fascinating works of mural art is on the walls of the Mattancherry Palace at Kochi which was probably executed in the late sixteenth century. It’s the Ramayana epic that seamlessly unfolds in the palliyara (royal bed chamber) on the upper half of the walls while the border is covered with simple textile designs that mural artists call "veeralli pattu". 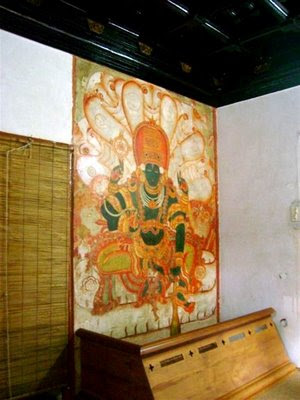 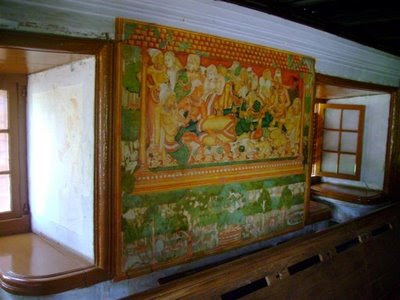 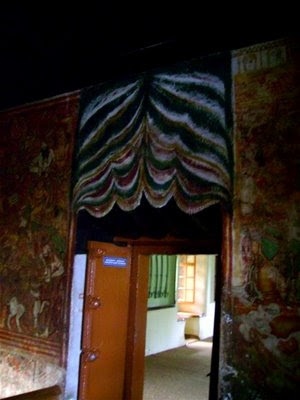 Temples and churches in Kerala have walls decorated with murals. Earlier the intention was not a public display of art for appreciation. Later on, when these palaces and temples were opened up for public appreciation that these paintings saw the light as far as the rest of the world was concerned.
A group of adventurous artists decided to go a step further and use this grand style on canvas, this magnificent style of painting moved form palaces to museums to homes and hotels winning accolades for the grandeur and breathtaking beauty of the rotund figures and blatant colors.

Colors and Expressions
A typical Kerala Mural Painting is done using five colours namely, red, green, yellow, white and black. Blue too has made its presence felt in later murals.
Obtained from natural dyes from the saps of leaves.
Each painting is painstakingly done in five steps.
1.On a white background, first comes the sketching where the deft lines of the artist bring out the contours and curves of the motifs.
2.Outlines are filled with yellow colour leaving the white spaces.
3.Red or green(as they are darker compared to yellow and white) are filled into the spaces where required.
4.The detailing with darker shades of the same colors and finally outlining with black.


The Detailing of the mural painting makes all the difference, for every square inch of the painting, the painstaking work of the artist can seen, the blinding of colors, the transition of shades, the play of light and dark and the intricate lines and curves are distinctive to this style. The shading itself is the hallmark of Kerala Mural Painting and even for the novice; it is easy to identify a genuine Kerala Mural Painting by a casual inspection of the shading and detailing.


The colour schemes in the murals represent certain symbolic characteristics.
The colour scheme is based on the psychological aspects of the characters portrayed.
"It mainly depends on the basic gunas laid down by Hindu scriptures
— Satva, Rajas and Tamas.
Green or blue is usually used for Satvik (pure or divine);
red and yellow for Rajasik (valour, passion, etc);
and black for Tamasik (impure, sinful behaviour, etc),"
Deities depicted in the murals are given colours on the basis of their triple attributes - Sathwikam, Rajasam and Thamasam i.e. Virtuous (the quality of SATHWA) 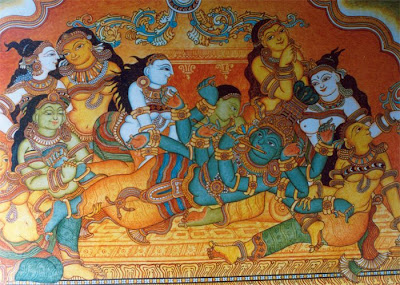 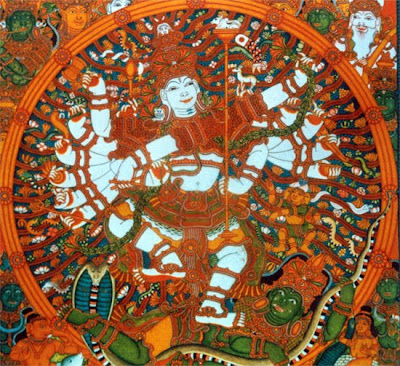 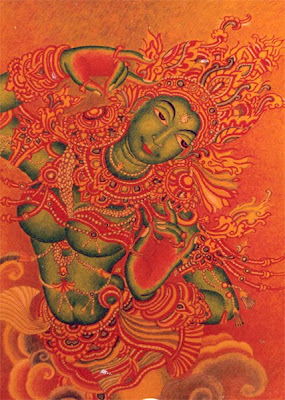 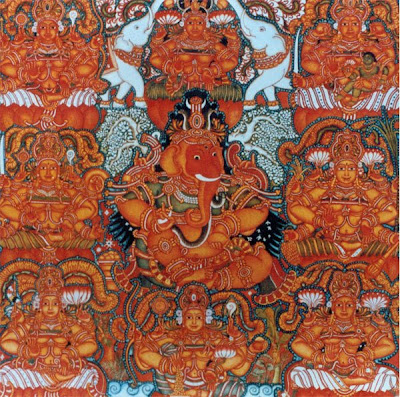 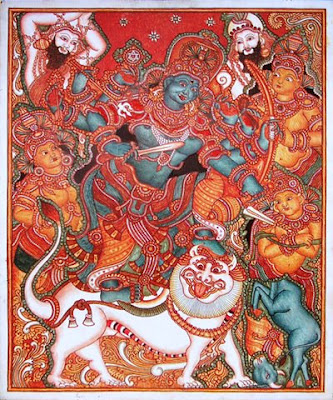 The ability of Keralities to restrain emotions is latent in their culture. This outstanding feature is very clearly expressed on the faces of characters depicted in the murals.
Themes
The themes of murals are mostly taken from the epics and the subjects related to religions.
The murals on the outer side of the walls of sanctums and towers represent Gods and Godesses. They embody the qualities characteristics of epic poetry or legends 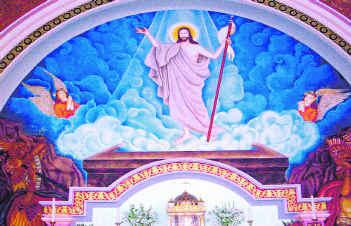 However this highly stylized art went out of fashion for most part of the twentieth century and it is only in the last decade and half that there has been a renewed interest and revival. Today it is the new age royals- industrialists like Rajshree Pathy, the Chairman and MD of Rajshree Group of Companies, who can enjoy this art in the same manner as the Maharajas of yore. The entrance of Pathy’s home in Coimbatore flow with the paintings of the Dasavataaram (ten incarnations of Lord Vishnu) done by Sadaanandan, Krishnan Mallissery and Ajithan Puthumana. 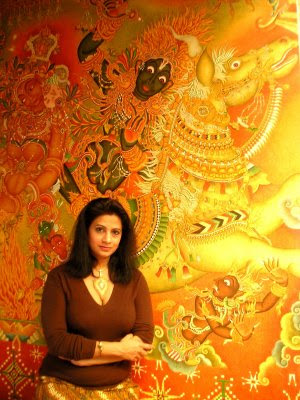 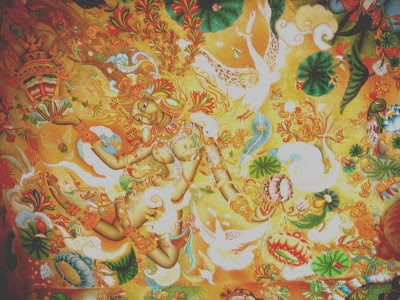 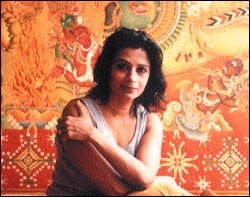 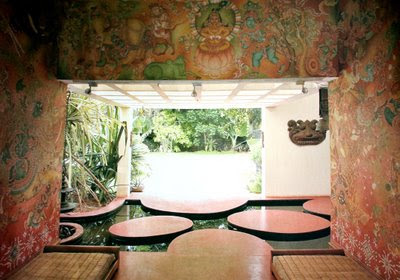 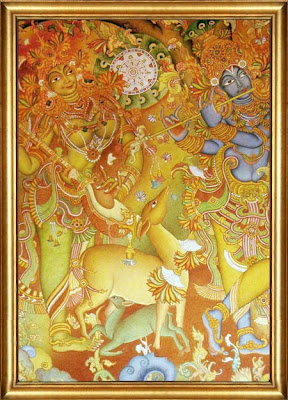 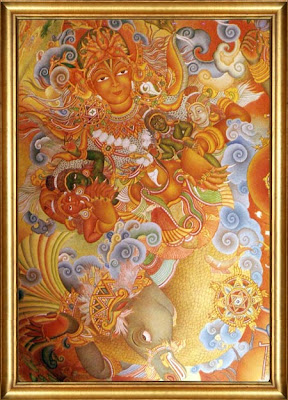 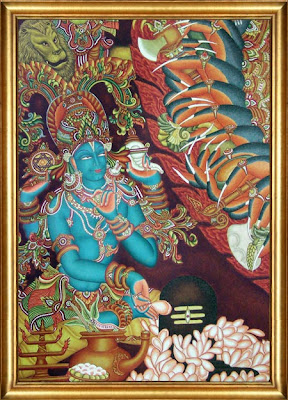 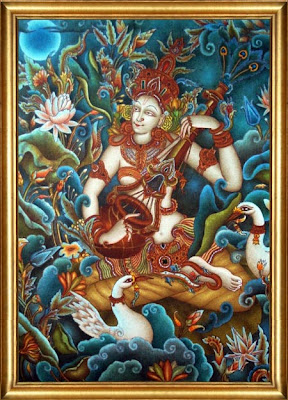 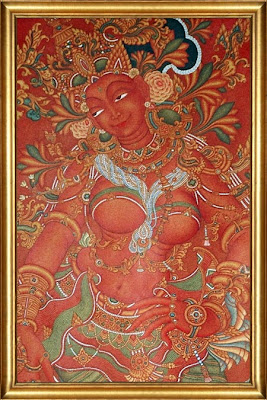 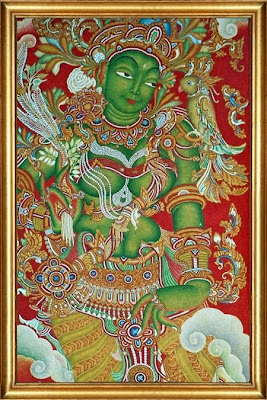 
The Kerala murals if done in the traditional method of treating the walls with the mixture of lime, sand and herbal water and then coating it several times with tender coconut water and lime mixture, then finally painting the mural with the five natural colours can last over a thousand years. But the modern concrete buildings with a lifespan of just hundred years make poor material to house this ancient art. Hence the rapid migration of this art from the walls to other surfaces like canvas and wood.
Image Courtesy:Artist:Sadanandan,Naveen
Literature courtesy:www.keralamurals.in,Panchavarna.in,Home-India today,Home Rejuvenation.
Posted by Lakshmi -Celebrations at 3:18 AM 25 comments