Abode of the Creator.

Most Indians start their day with his blessings and end the day with an offering of gratitude to him. Amidst the bustle in their lives there is a special place where they unite with their creator.Religion is perhaps the largest creator of conflicts,while God the single largest driver of creativity. The thought of god and is abode generally gets one thinking of the scale and creativity of Khajuraho, Konark, Abu and Ellora.Often overlooked ,however is the effort of the common man to create the most revere and scared space in his house.Residential temple forms are wide and varied and range form chowkis(simple platforms),singhasans(seats),palkis(palnquins) and jhoolas(swings) to aalas(wall niches )pavilions and cupboards.These temples are used indoors and outdoors,mostly in prayer rooms or chowks(courtyard) in the traditional havelis. Their size is determined by the parameters of the space they are likely to be placed in. Materials vary from wood to stone to silver and brass. 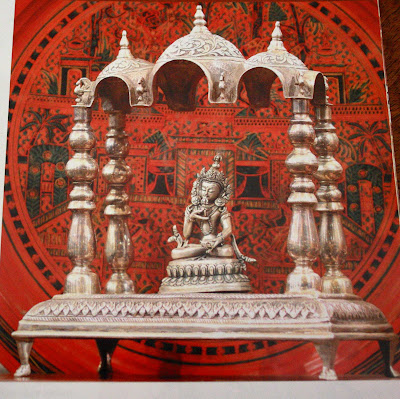 CHOWKI
Basic form of a residential temple.
Consists of a wooden platform on feet. 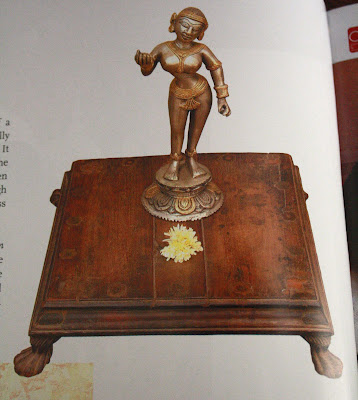 MINIATURE SINGHASANS
* A singhasan is essentially a chowki with a back.
* Miniature versions of life size singhasans or royal seats.
* A brass back has been mounted on the wooden platform.
* The back has a yali head on top below which is a makartoran (alligator gate-a mythological depiction generally seen in most religious entrances) 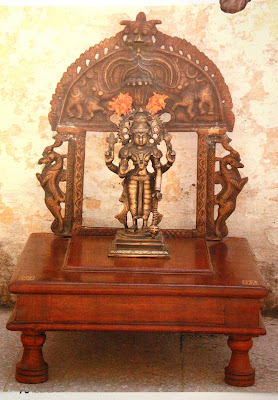 PALKIS
* A palki is a singhasan with wooden arms on which the deities are carried during festival processions by palki bearers.
* the wooden arms of the palki are dismantled and the singhasan is placed in the prayer room for regular worship.
* the example is a wooden Gujarati singhasan. It has a miniature railing, lion legs, secret wooden compartments, back is carved and has a cut-out for a small religious photograph.
* the iron angles on the sides on which the wooden arms are attached, converts this into a Palki. 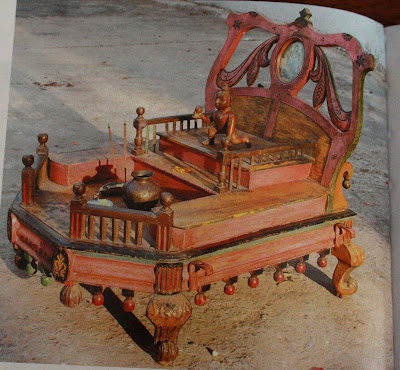 JHOOLA
* A jhoola is a singhasan suspended from an arch held by 2 pillars anchored to its base used by Hindus during Janmashtami to cradle Lord Krishna.
* the most beautiful in design is the gilded Jhoola.
* it is carved in wood and covered in gold leaves. 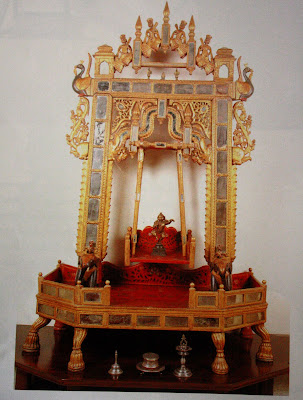 A lot of miniature temples are inspired prevalent architecture and its nuances.

Listed below are a few examples:

Chhatris
Dome shaped structures in which the dome is supported by pillars which are then anchored on to the base.
Bulbous columns supporting the domes with floral ornaments and peacock shaped finials. 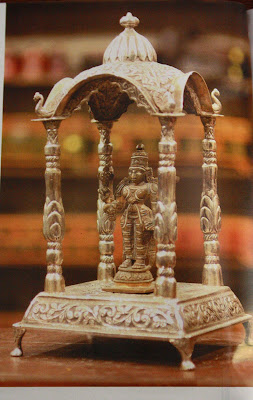 Pavilions
Miniature versions of architectural pavilions. Four columned pavilions with a roof that has a parapet wall and a sloping overhang supported by cast white metal angels. Pillars are mounted on a singhasan with a lot of petal ornaments and a crocodile spout to drain out the holy water. 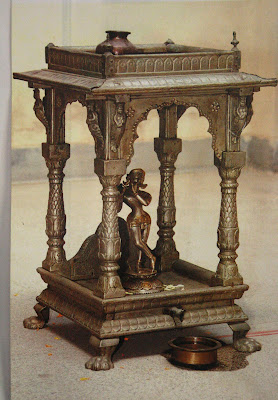 Niches
Aalas or niche temples are fashioned like window openings in building facade with similar architectural features. Statues are displayed in the niches. They also function as built-in wall cabinet temples. 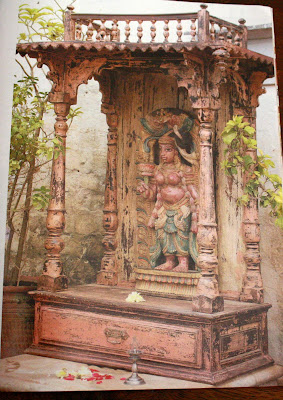 Stepped temples
A chest of drawers with a tiered display for the deities and drawers for storage of prayer accessories. 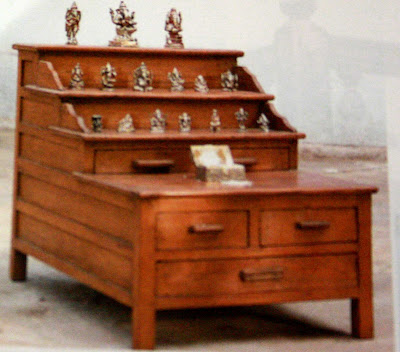 Vitrine temples
This temple is fashioned in the shape of a quaint colonial glass case with its stepped display and is mirrored. 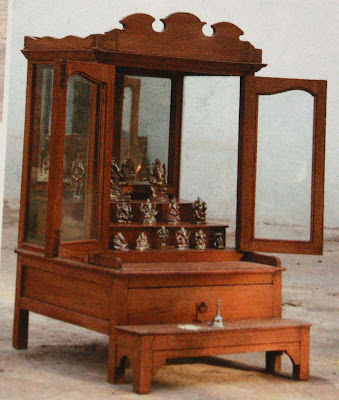 Bhandaras
Commonly found in North Indian haveli prayer rooms, it is a large strong box like cabinet with 2 sections with small openings. One section is a safe while the other is a temple. 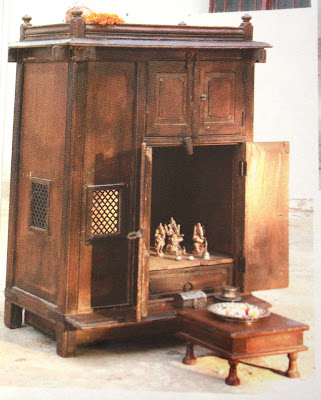 BOX TEMPLES
They are also called Gattajis. They are designed as travelling temples to aid Jain travellers to carry their Deity along with them on their travels. The Gatta consists of a painting of a Jain Tirthankar fitted into a glass box with a mirror under the lid.
The mirror ensures that even if the image is facing downwards, the reflection always points to the sky (the God should not face the ground). They can be opened and setup as required. 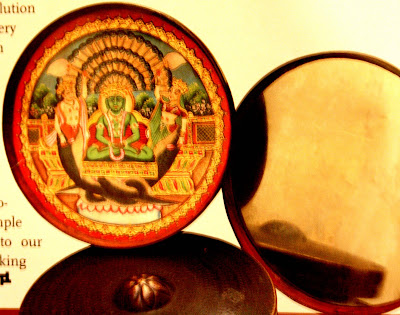 The illustrated examples show the evolution process in home temple design. Very interesting to note that temples have been traditionally used as safes to store valuables like money, jewellery and silverware. the underlying logic is that thieves would fear God and not steal from a temple.

While organised religion is on the wane, our lives still revolves around God. As we move to towards a global socio-cultural and design vocabulary, these simple yet stunning examples of design fit into our cosmopolitan habitat. the tradition of making temples continues strong as ever.

The temples featured in this article are from the collection of La Boutique, New Delhi. Image and text courtesy, IDI November 2004. Courtesy Rahul Backliwal and Anshuman Sen.
Posted by Lakshmi -Celebrations at 9:16 PM 6 comments

*Pookalam is an intricate and colourful arrangement of flowers laid on the floor.
*Tradition of decorating Pookhalam is extremely popular in Kerala
*Followed as a ritual in every household during ten-day-long Onam celebrations.
*'Pookhalam' consists of two words, 'poov' meaning' flower' and 'kalam' means 'colour sketches on the ground'.
*It is considered auspicious to prepare Pookalam, also known as 'Aththa-Poo'
during the festival of Onam.
*Pookalams actually welcome the most loved King who comes to visit his homeland once a year.
*Athaapoovu are usually circular in shape and multi-tiered colourful arrangements of flowers, petals and leaves.
*Normally laid on the front court yard of the house.
*Idols of Mahabali and Vishnu are placed in the center of the Pookalam and worshipped.
*Diameter of a Pookalam normally ranges from four to five meters.
*Its a big creative task, as designers have to think of a new design ever day. 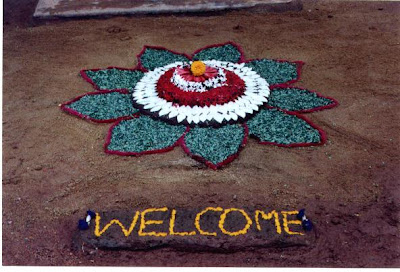 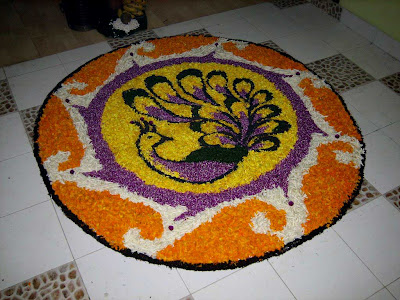 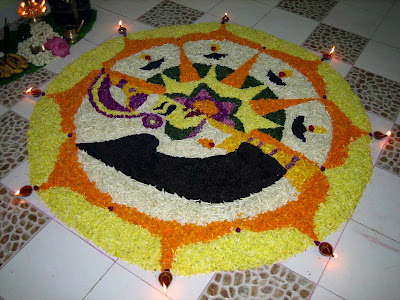 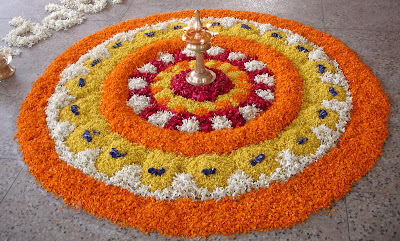 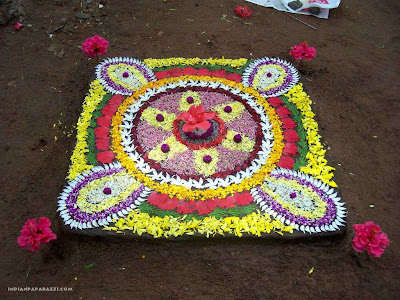 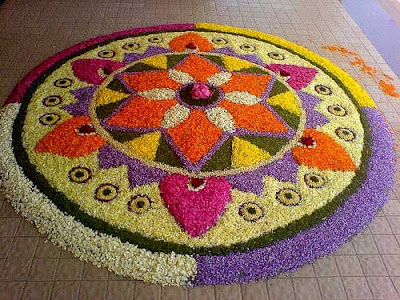 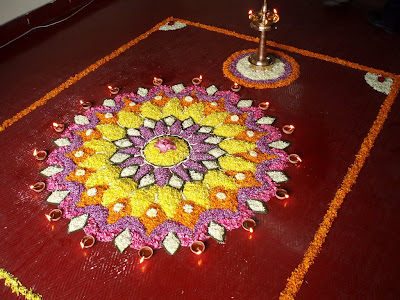 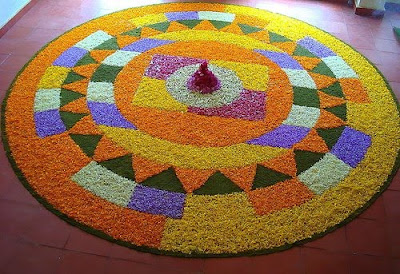 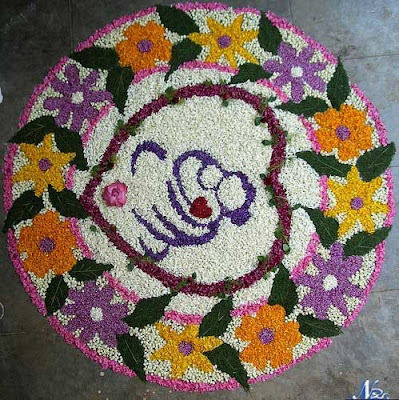 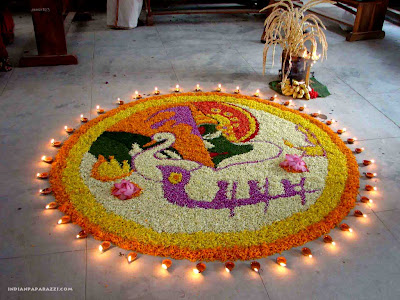 Below is the Pookalam  at  home when Onam came visiting our house.
Some shots of the Flower carpet and my little one..
Gods are represented by clay pyramid like structures in the middle of the flower carpet. 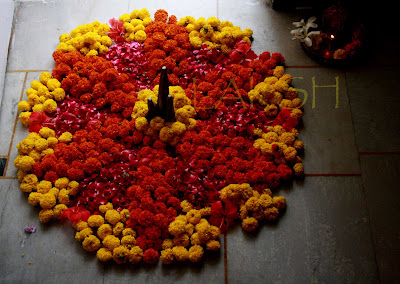 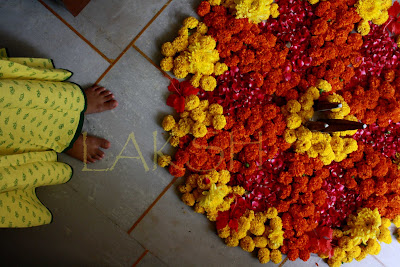 Little one admiring the pookalam 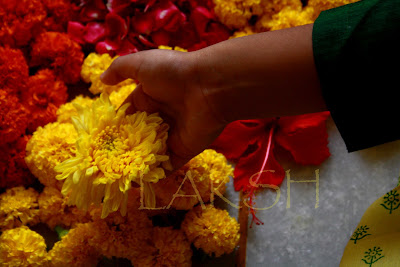 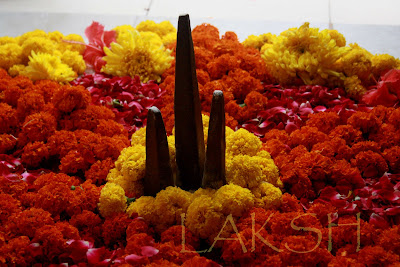 For a detailed story on Onam at our home pl do visit Celebrations of Life
Image courtesy:indianpaparazzi.com
Posted by Lakshmi -Celebrations at 10:49 PM 5 comments