‘Krathongs’, are small lotus-shaped boats made of banana leaves and banana tree, or environmentally insensitive Styrofoam. These these rafts are entrusted with candles, incense, flowers, and coins before they are floated down rivers, into lakes, or simply atop a still backyard pond.Bread raft was introduced to protect the environment because of the fact that having numerous rafts can lead to a huge water pollution problem. As a result, the bread raft was ingeniously created not only for the user, but eventually, the raft will become food for the fishes and other animals living in the river.

All forms of rafts are decorated with uniquely folded banana leaves, candles, flowers and incense sticks, among others.The krathong are both signs of respect to the goddess of the water, and apologies to the River Goddess for polluting her waters during the year .Loy Krathong is celebrated during the full moon of the 12th month in the Thai lunar calendar and usually falls in November in western Gregorian calendar.
I remember the similarity these boats have to the flower boats we float in Rishikesh and Haridwar!
Its beautiful to think about the similarity in  thoughts and the rituals:)- all over the world.. 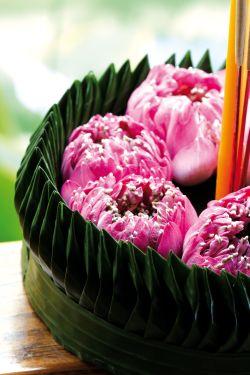 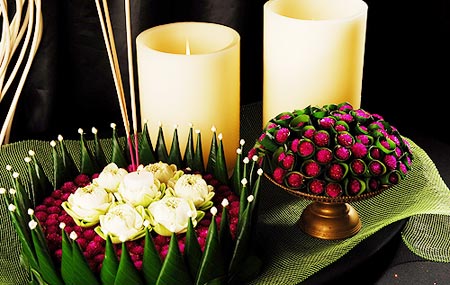 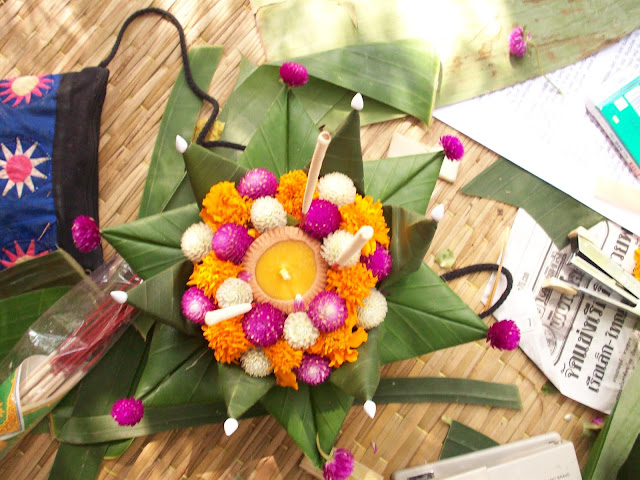 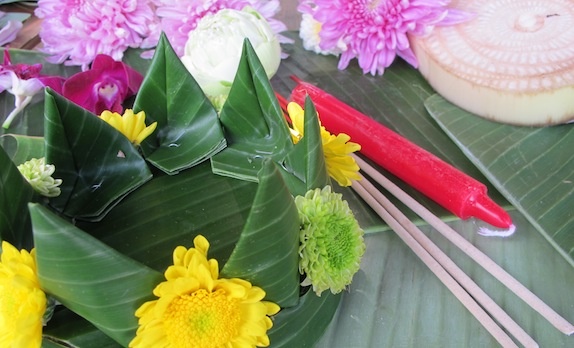 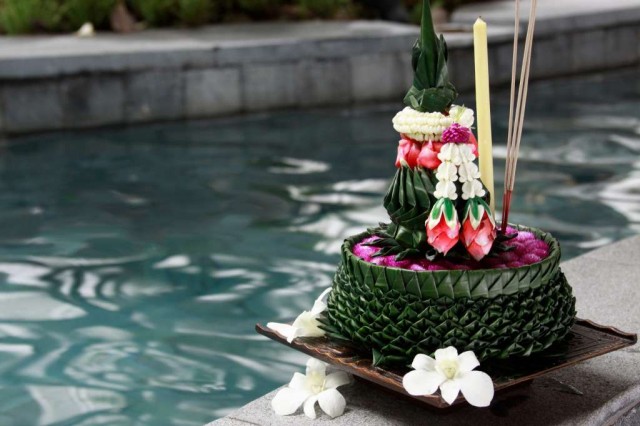 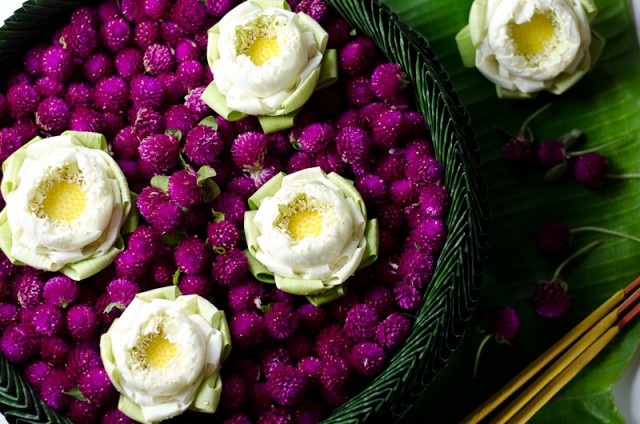 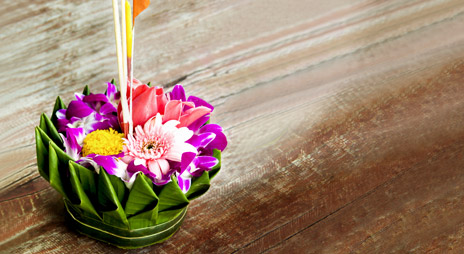 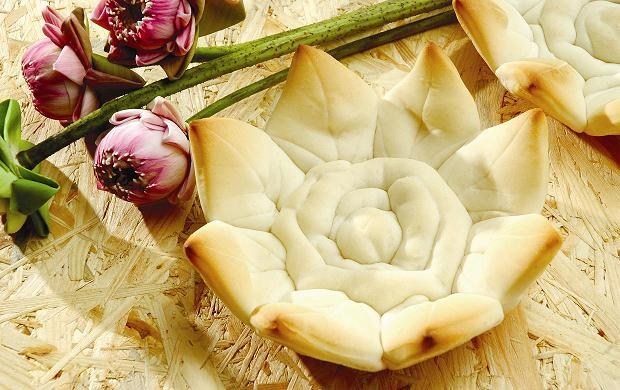 All images courtesy:Pinterest and here
Posted by Lakshmi -Celebrations at 12:06 AM 0 comments

Visual Prayers on Earth for Deepavali !

Reading and learning more every day about the traditions and stories that fascinate, inspire and makes me the person I am today. I hope I can honor these traditions and teach my children to follow them for the adoration and ornamentation of the earth which sustains us, but equally a ritual invocation of the Gods for acquiring their blessings more than beautifying the homes. This year at home its going to much more on a traditional note as always. The more you read about I am in love with the floor designs a visual prayer created on the earth.

Rice art on the floor is a representation of the artistic sensibility of the people of that state of India.Rice art on the floor is known in different names in the whole of Indian Subcontinent. Its quite interesting as we read through the literature and different blogs and books.Kolam in tamilnadu,Rangoli in Gujarat,Karnataka and Maharashtra,Aipan in Himachal Pradesh,Aripan in Bihar,Alpona In West Bengal,Chita in Orissa,Mandana in Rajasthan,Muggu in Andra pradesh and Chowkpurana in UP.

“Drawn with rice powder, lime or chalk, the process of creation is as important as the finished form. The designs drawn thus on the floor have a magical power and presence. They were used as welcoming signs at the entrance of the house, for a guest must be welcomed with grace and elegance. Beauty being equated with godliness, it was also the symbol of good omen and therefore is associated with every phase of life. These universal patterns and symbols were created and revered during rituals” (As explained by d.source.in).The floor paintings have also been used as protection against evil spirits. While drawing these rangolis special attention is paid to the fact that the entire design must be unbroken and must not have any gaps for an evil spirit to enter.

Lived in South India I am quite familiar with the word Kolam. A rice art which is popular in South India ,basically in Tamilnadu. They are believed to produce cosmic positive energies which benefit people residing in the house".In olden days, kolams used to be drawn in coarse rice flour, so that the ants don't have to work that much for to long for a meal. The rice powder is said to invite birds and other small critters to eat it, thus inviting other beings into one's home and everyday life: a daily tribute to harmonious co-existence. It is a sign of invitation to welcome all into the home, and the goddess Lakshmi the "goddess of prosperity".(courtesy:http://dereisnaarbatik.blogspot.in/)

Different commuities,different states have their own variation in decorating these visual prayers on the floor. Alpana is a sacred art in India, in which drawing are made using rice powder on floors in front of houses and around altars. It is known under different names, in different areas of India, most common 'Rangoli', 'Kolam' and 'Jhoti'. The word Alpana is derived from the Sanskrit "alimpana", which means "to plaster" or "to coat with".The circular Alpana is very important and is drawn as a holy pedestal while worshipping a deity, especially during Lakshmi Puja.Aripan is a variation of Rangoli, practiced in Bihar. The Aripan floor painting is derived from the Sanskrit word Alepan (meaning - to smear). It refers to smearing the ground with cow dung and clay for the purpose of purification. Aripan is a type of Mithila art that originated in the Mithila region of Bihar, particularly in the village of Madhubani. The origin of the art is shrouded in mystery. It is generally believed that it was created during the epic period when King Janak of Mithila ordered the marriage hall to be decorated for his daughter Sita’s marriage to Lord Rama. Some vivid descriptions of these wall and floor paintings are present in Tulsidas’s Ramcharitamanas. Aipan patterns and motifs are typical to the region of Kumaon. For the Kumaonis, each deity in the Hindu pantheon has a special symbol and every occasion demands an Aipan of a different kind. Every Aipan design has a particular meaning attached to it.

A compulsory aspect of Lakshmipuja (is performed during Diwali, the festival of lights. Diwali marks the end of the harvest season in most of India) is the alpana drawn by women.These paintings are made with rice powder mixed with water (for special occasions limestone and red brick powder(Geru) for contrast are also used and that is a peculiarity of Mandana paintings in Rajasthan. Modern interpretations have accommodated chalk, and ready-made rangolis of wood, plastic templates and vinyl stickers). There are several motifs that are drawn on the floor around the deity's altar. The motifs are stylized in characteristic ways and incorporate certain patterns associated with Lakshmi such as the lotus, Lakshmi's feet, Lakshmi's companion owl, the sun, a ladder, a plough, a fish, betel (the leaf of a vine belonging to the Piperaceae family, which includes pepper and Kava), shankhalata (a snake) and sheaves of rice. The alpana represent the world of the goddess and brings good fortune to the home.

Lakshmi is the Hindu goddess of wealth, prosperity (both material and spiritual), fortune, and the embodiment of beauty. She is the consort of the god Vishnu. Also called Mahalakshmi, she is said to bring good luck and is believed to protect her devotees from all kinds of misery and money-related sorrows.

In Bengal, Lakshmi is worshiped in autumn when the moon is full, the brightest night of the year. It is believed that she showers wealth on this night. She, along with her mount, the great white owl, descends to Earth and takes away the darkness of poverty, stagnation, anger, and laziness from our lives. Her vahana owl represents royalties, penetrating sight and intelligence.

Making alpana is considered an important part of the spiritual process.  Not everybody can do alpana, those who can are considered special and admired for their artistic quality. There are rules to be followed making rangoli or kolam. In front of houses the patterns made should be closing, so that evil spirits can't enter. It is best to make the drawing without pausing or lifting your hand to far from the ground. In some places the kolams are made everyday, in other places only during special occasions like marriages and rituals.

It represents a philosophy of life that enthusiastically celebrates the impermanence of knowing and devotes itself to a constant wish to live in the present.

Worshipping Lakshmi isn't just about doing rituals, it's about making a nice home for your family and guests, being creative and fulfilled with what you got. This will bring you happiness and therefore fortune.

Information from http://www.dsource.in/resource/rangoli/types-of-rangoli/alpana/index.html
* Scans and information from the book 'The Art of Rice' by Roy W. Hamilton
** Scans from Nederlands Openluchtmuseum Balie BiDoc
*** Scan from the book 'volkskunst der lage landen 1'
Posted by Lakshmi -Celebrations at 10:54 PM 4 comments

Make space for gratitude and inspiration with a beautiful home Altar that celebrates the love of your life and the qualities you want to embrace in yourself ! (om)

"Beloved goddess, how I desire to follow in your wise footsteps. Guide me as I walk my own sacred path. Teach me the hidden wisdom of your mind."(quotes)

Light the Diyas of happiness and prosperity 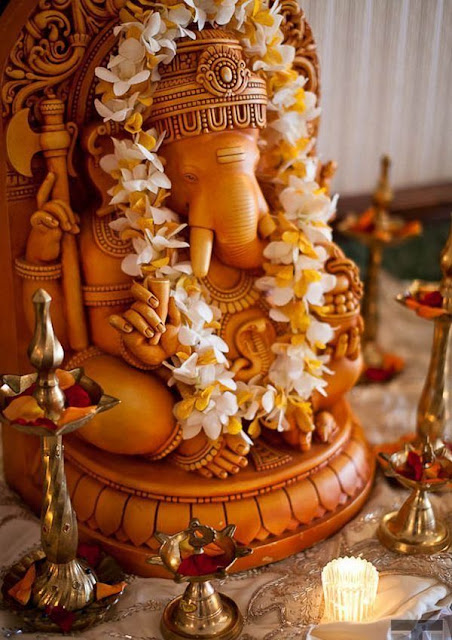 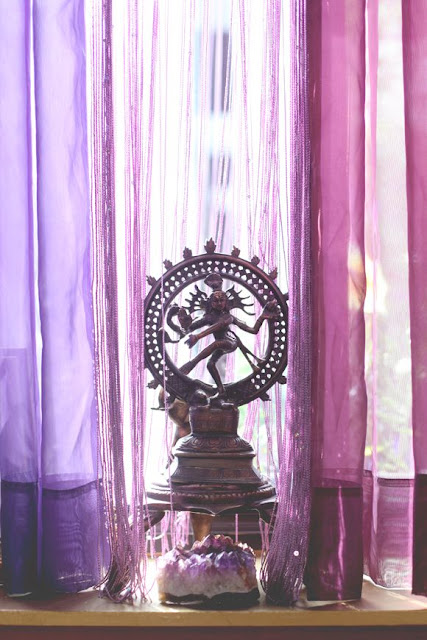 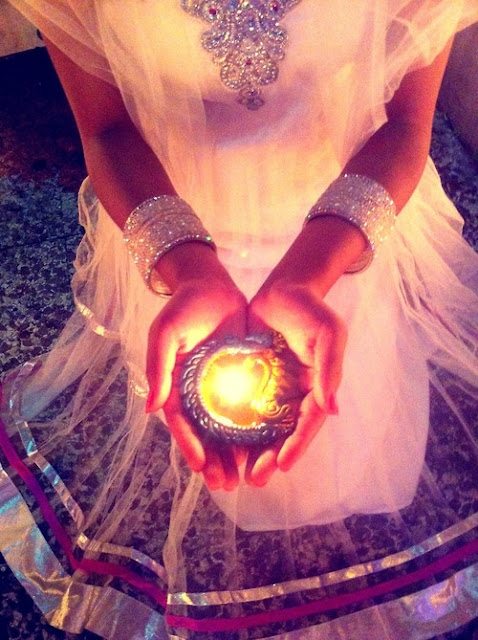 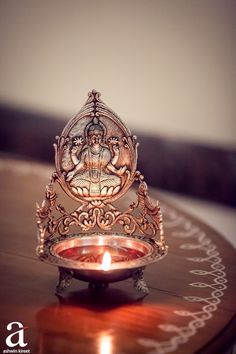 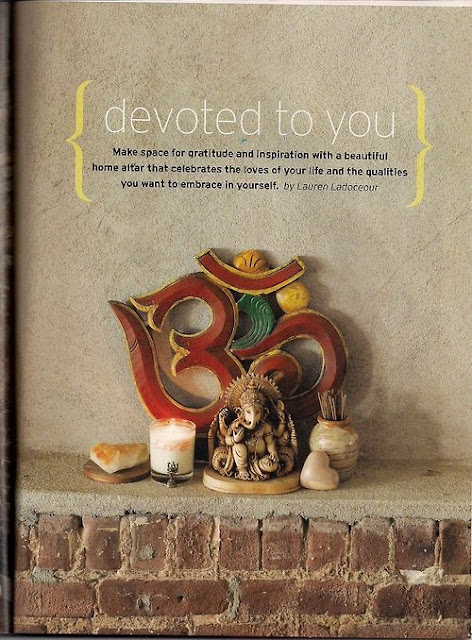 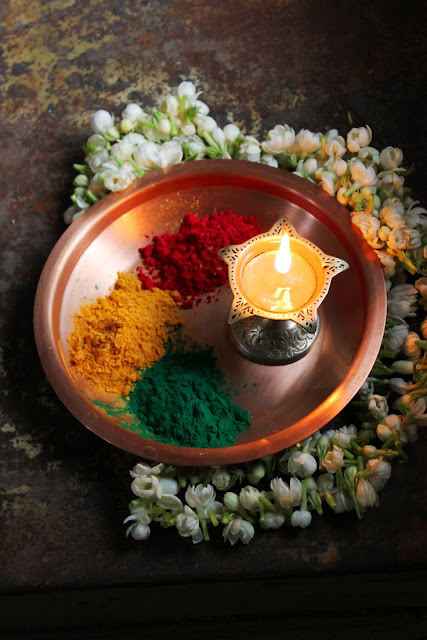 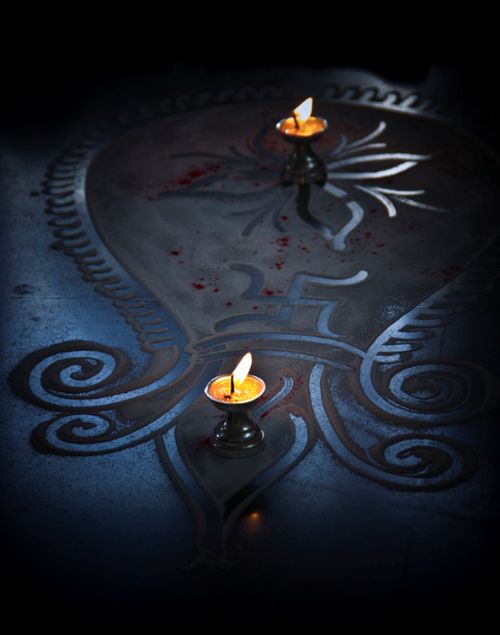 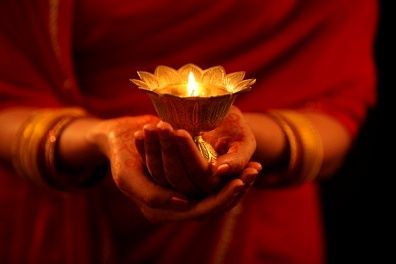 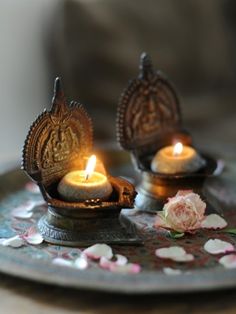 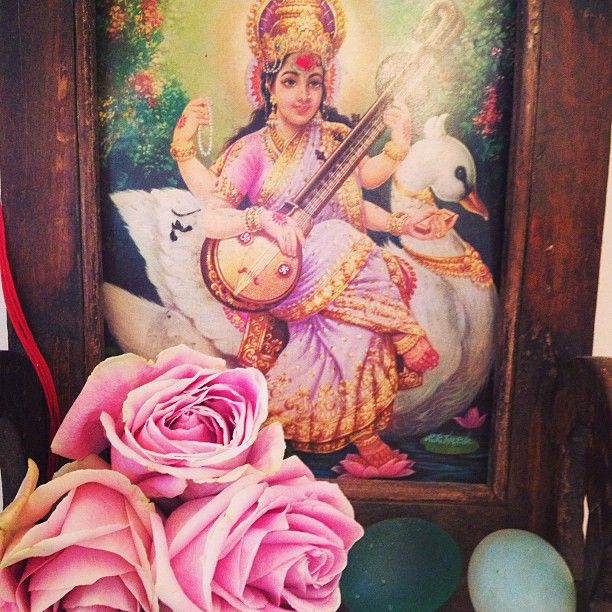 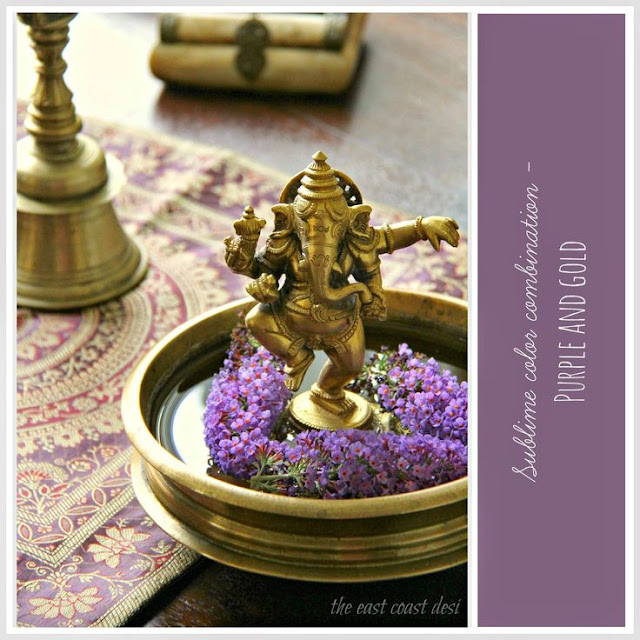 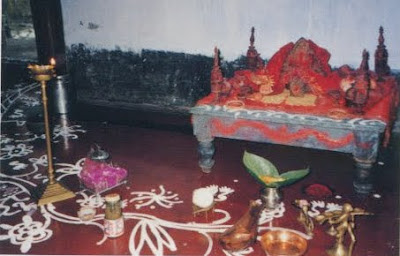 Any image to be removed from the blog please contact dr.lakshmi@live.in
Posted by Lakshmi -Celebrations at 10:53 PM 2 comments

Lets get into the..
Festive mood of Diwali 2015 !
The diwali festivities started yesterday with the making of an Aakash Kandili at home:)-
Watch out for a series of small Diwali inspirations:) ,Diwali stories and videos!


A kandeel is a lantern with a wooden framework and covered in coloured matte or glossy papers. These lanterns are generally hung in front of homes during the Hindu festival of lights, Diwali.] Kandeel in Sanskrit is known asakasha deepa (lantern of the sky) and in Kannada, Goodu Deepa (nested light), or Nakshatra Gudu (star-like nest). Hindus in earlier days set kandeels afloat high, a gesture to invite the spirits of their ancestors moving around to come back home and be with them during the festival time; hence the name akasha deepa (lantern of the sky) or AkashaKandil.
In Kerala, we call it as akasha vilakku.  During the Hindu lunar month of 'Kartika', the people use to put akasha deepam, in place on roof tops of the houses and light them in the evening until dawn breaks in and up to the Karthika Paurnami (full moon) day or Dev Dewali day. Earlier oil lamps were used, which are fixed in the panjire (cage models), now colourful electrical lights are used instead. By lighting the panjiras it is believed that during Kartika those who had died used to visit their houses and wish their relatives wellbeing, or if the lights were not lit in front of the house, the curses them to live them in darkness in life.
Kandeels are hung for around a month from the first day of Diwali. Kandeels are traditionally built in a crystal shape with tails at the bottom; shapes include stars, globes and airplanes. Opaque papers cut into a complex design give more beauty to a Kandeel by blocking some of the light behind it.

Images courtesy from here and here and article information courtesy..Wikipedia
if any problem in using these images,let me know and we will get them removed.
Posted by Lakshmi -Celebrations at 9:48 PM 0 comments